This post is all about what I was unable to discuss during my talk at Defcon 21 "Powerpreter: Post Exploitation like a boss". In 45 minutes one can only highlight limited things, so this and some more posts would try to fill the gaps left during the talk.

Powerpreter is a powershell module. I decided to make it a part of Nishang as there is a large amount of repeated code. This post assumes that we have Administrative access to a Windows 7 machine. Powerpreter can surely be used as a non-admin user but obviously with limited (but still useful as seen in below examples) functionalities. Like other scripts in Nishang, I have tried my best to keep powerpreter compatible to powershellv2 so you may see some code which could be done by a cmdlet in powershellv3 and v4.

Once we have access to a machine, powerpreter could be downloaded and imported in a powershell session for further fun. For using hashes or credentials with powershell remoting see my previous posts:
http://labofapenetrationtester.blogspot.in/2013/04/poshing-the-hashes.html
http://labofapenetrationtester.blogspot.in/2013/05/poshing-hashes-part-2.html

From a powershell remoting session:

Now, to list the methods in the imported module:


We can list help for each function by using help. For example to get help for Check-VM

Now, lets have a look at some of these methods/commands/payloads. Some of the payloads in powerpreter have already been explained in blog posts about Nishang. I will explain only couple of those and some new functionality in powerpreter:

You can also use -exfil option if you would like to exfiltrate info to pastebin/gmail/tinypaste. See this for more detail: http://labofapenetrationtester.blogspot.in/2013/06/nishang-0-2-7.html

Use Enable-DuplicateToken to escalate to SYSTEM and then use Get-PassHases or Get-LsaSecret depending on your requirement.

Let's see it in action from a meterpreter.

First we download the powerpreter. I use -encodedcommand option with powershell.exe in meterpreter to avoid any issues. StringtoBase64 in powerpreter could be used for this.

In case of Get-LsaSecret on 64-bit machine, 32-bit powershell needs to be run. So use this path for powershell.exe: C:\Windows\SysWOW64\WindowsPowerShell\v1.0 from powershell remoting session. But while using meterpreter if the process on target is 32-bit, no need to specifically call 32-bit powershell.

This backdoor can be controlled using a website whose content could be changed. Lets use pastebin for this. 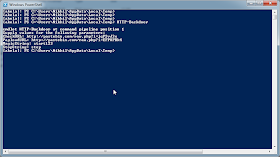 It asks for four parameters. It keeps polling the url provided in CheckURL option for a string, provided in the Magicstring option. As soon as the string matches, it pulls a powershell script/command from PayloadURL.

Differents commands or scripts can be executed by changing the payloads in PayloadURL. After a sucessful execution, it waits for 60 seconds before polling again to avoid generating too much traffic.
The backdoor starts in a new process. With -exfil option, results of the backdoor could be exfiltrated.

This is how the backdoor process will look to naked eyes.

DNS TXT Backdoor
This backdoor uses DNS TXT records for receiving commands and scripts to execute as well as instructions to stop and start.

The backoor asks for various options. StartDomain is the one which would be polled by the backdoor for instructions. Three possibilities are present


As in case of HTTP-Backdoor this backdoor also runs in a new process and could use -exfil option. The below example shows a usage of backdoor.

We executed Get-Service on the target and results were exfiltrated to gmail.

Now lets have a look at Keylogger. Unfortunately, this does not work from a powershell remoting session. Lets run it from a meterpreter session.

The keylogger logs keys to a file in user temp directory of the target. The logged keys could be parsed using Parse_Keys script in Nishang. If you use -exfil option and select gmail , the key.log file would be sent as an attachment to the given gmail id.To avoid sending same keys repeatedly, after 30 reads key.log is flushed out.

DNS TXT Code Execution
This payload could be used to pull shellcode from DNS TXT records. The shellcode is then executed in memory. We have to provide different domains for 32-bit and 64-bit shellcode. The payload will determine the architecture during execution and pull the shellcode accordingly.

We could use the command given in help of the payload to generate the shellcode using msf.

Lets see this in action on a 64-bit machine. 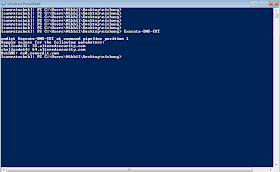 On the listener console:

The code execution code is written by Matt Graeber.

UPDATE: Since many of you asked - HTTP-Backdoor, DNS TXT Backdoor, Keylogger and DNS TXT Code Execution - all could be used by a non-admin user. Though to use powershell remoting we must have admin access to the remote machine, unless configured otherwise. So, if we have non-admin shell access to a machine we can still use above.

Special thanks to Lee Holmes for going through my ugly coding of powerpreter and suggesting changes.

Ok, that is enough in this post about Powerpreter. As powerpreter is going to be a part of Nishang, I would like to announce an updated version Nishang 0.3.0. Changes could be found in the CHANGELOG below.

BTW Nishang has a logo of its own now :) Please let me know how you found it to be. It is "designed" in powerpoint and the background was removed using lunapic.com

Also, if you are looking for slides of my talk at Defcon, they are here:
http://labofapenetrationtester.blogspot.in/p/blog-page.html

Hope you enjoyed this post and it would be useful. As always, please let me know about bugs, feedback and feature requests.
Nikhil SamratAshok Mittal at 7:37 PM 12 comments:
Share
‹
›
Home
View web version