My fascination with DCShadow continues, thanks to Vincent and Benjamin. I blogged about it previously as well.

One very interesting thing which I recently discovered is the ability to DCShadow to modify System Access Control List or SACL. When we enable auditing on success or failure on an AD object, an entry (called ACE - Access Control Entry) is added to the SACL of that object. The permissions to an object are controlled by a DACL. For example, we modified DACL of AdminSDHolder in the previous post for persistence.

So, SACL controls auditing (logging) for an AD object. This means if we would like to avoid logs for our activities during an assessment , we should turn it off at the very first chance. Right? But is it that easy?

Let's assume that full auditing is turned on the AdminSDHolder container and even a read operation is logged. This is what the SACL looks like: 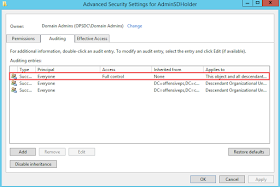 The SACL governs logging of stuff. For example, with the above auditing settings, if we add Full Control rights for a user to the AdminSDHolder for persistence, an Event ID 4662 is logged: 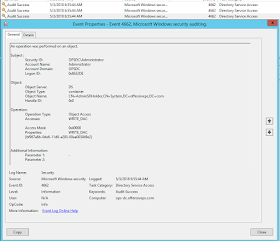 Now, we would like to turn auditing off for the AdminSDHolder object so that the above logs are avoided. Right? Right? ;)

This can be done by removing the ACEs. But it is not as silent as we would like it to be. Removing ACEs results in more 4662s: 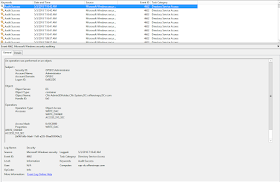 In case we were targeting a user object and remove auditing for it, a 4738 (User Account Management) in addition to multiple 4662s is logged.

Now, how does DCShadow help? Try the below commands to set ACL of the AdminSDHolder to turn off the enhanced auditing:

Bingo! No logs for turning off logging. Of course, I cannot show you no logs :P But we can see the new SACL: 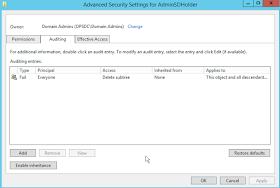 Please note that we will still have logs related to DCShadow (4742 for the Computer registered as DC and 4662 for the domain object) but nothing else.

Note that the auditing entry in the above is S:PAI(AU;CIFA;DT;;;WD)

What does that mean?
S: - SACL
PAI -  Inheritance from higher up objects is blocked
AU - System Audit
CI - Container Inherit - The child objects inherit this.
FA - Audit Failure
DT - Delete Tree - No specific reason for using this other than chances of this being logged are low.
WD - Everyone
If you are not familiar with SDDL, go through these Technet posts to begin: The Security Descriptor Definition Language of Love (Part 1) and Part 2.

So why the above entry? No special reason. I thought, it would be better to leave an entry than removing all of it. If you want an ineffective SACL use just S:PAI. This is how it looks in the GUI: 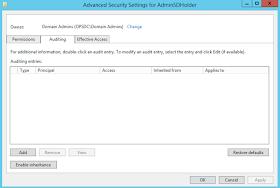 You can use the below code for reading existing ACLs for an object. To easily get the desired ACE, set it up using GUI and then read the entries using the below code:

This is sweet but there are so many chances of further research on this. Like, there is still a single 4662 logged when mimkatz does "Attributes Checking" before we push the attributes. I read the source code of mimikatz and tried to avoid that read, but no success.

Also, I cannot find a way to turn off default SACL for the domain object. In theory, this should be easily doable with similar commands we used above!

Also, there are detections based on absence of logs as well. Unless we go for minimal modification to auditing we will still be detected.