This update of Kautilya introduces reboot persistence for HTTP Backdoor, DNS TXT Backdoor and Keylogger. The payloads for Windows have been rearranged in five categories making the menu clearer.

Another major improvement has been the addition of DNS TXT exfiltration and HTTP POST exfiltration to your own website. That means, your need not leave credentials of your pastebin/gmail on target.  Note that in case of gmail, you can use application specific passwords. Both of these exfiltration methods were suggested by users.


So, please keep the feature requests and suggestions coming :)

Persistence
WMI permanent event consumer is included in the code for persistence, But actually, it is not being used by any payload! Why? Because, it requires administrative privileges and both the backdoors run with non-admin privileges. In the case of Keylogger too, only Run registry key is used. Besides the above reason, there is one more catch, the WMI permanenet event consumer we are using, executes the payload with SYSTEM privileges on system reboot while the Keylogger logs keys in the context of the user it runs. This makes it necesarry to run the Keylogger with the privileges of current user and not SYSTEM.

So persistence using WMI is included for future use. Do leave a comment if you think additional payloads needs persistence. It is trivial to do but needs little code changes in .ino or .pde file of that payload.

A powershell script Remove-Persistence.ps1 has been added in the extras directory which could be used to remove persistence added by various payloads in Kautilya. 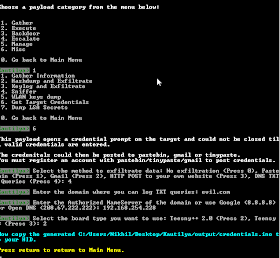 After compiling and uploading the generated payload to a HID, lets connect it a VM, we see this:

The exfiltration method could also be used for bigger data, it simply divides the data and sends multiple queries. I will soon write a separate blog post to cover that.

Now, this data is compressed and encoded using the method found here. To decode it, use Decode.ps1 which has been added to the extras directory. 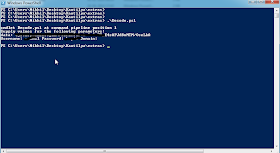 Great! We were able to exfiltrate data using only DNS TXT queries.

A VM in my lab is running a simple code, which I got from stackoverflow.


Now, lets try this with the WLAN Keys Dump payload. 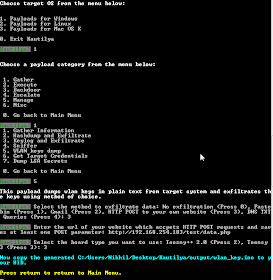 And we can see this on the web server:

Size of the payloads
Those who take interest in source code of Kautilya may notice that all the payloads have been made more modular. It means, if you chose not to do exfiltration the payload would be much smaller now, unlike earlier. Same goes for persistemce. This makes it easier to use payloads of Kautilya on various devices.


Here is the full CHANGELOG


You can find kautilya here: http://code.google.com/p/kautilya/source/browse/trunk

As always, I welcome feedback, bugs and feature requests.