Kautilya 0.5.0 is out. This version adds six more exciting payloads for Windows and supports Ruby bundler! I tried to do away with the menus and make Kautilya UI interactive shell based just like MSF but my Ruby skills failed me. I would be glad if some ruby expert could help me with that.

Anyway, lets have a look at what are the new things. 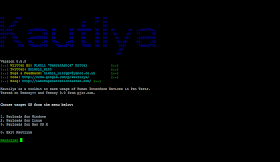 Coming to the payloads, the new ones are:

Just compile this to your HID and plug in the device.

Dump passwords in plain
This payload is able to dump passwords of users on the target system in plain-text. It uses the excellent Invoke-Mimikatz by Joseph Bialek. You need to host the Invoke-Mimikatz.ps1 on a webserver, it would be downloaded and executed in memory from there. The script could be found in the extras directory.

Lets use it from a local server. Also, lets choose gmail to exfiltrate the results.

And what we get is 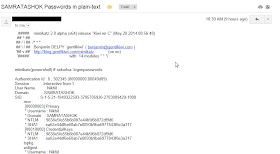 Great! There is nothing better to get hold of plain-text credentials.
You could also pass any command of Mimikatz with "Invoke-Mimikatz -command

Copy SAM
This payload copies the SAM file with the help of Volume Shadow Service. The SAM file could be exfiltrated ONLY using gmail right now.

I understand that using gmail only means you need to leave credentials of a gmail account on a target. I tested converting the SAM file to hex and exfiltrating using other options but the size of hex file is too big to make it practical, the compression and encoding built in Kautilya, the compress_encode function in exfilmethoddefs file, didn't work either.

Execute Shellcode
Use this to execute shellcode in memory. This is based on the awesome Invoke-Shellcode from Powersploit by Matt Graeber. You need to host the Invoke-Shellcode.ps1 on a webserver, it would be downloaded and executed in memory from there. The script could be found in the extras directory.

After compiling it to a HID and connecting the HID to a target, we could see following on the listener:

Nice!
The default is set to Metasploit's windows/meterpreter/reverse_https which would work for both 32-bit and 64-bit machines.

Dump Process Memory
This payload takes a full minidump of a process. The dump file could then be exfiltrated using gmail ONLY (same reasons as for Copy SAM). The payload uses logic from Out-MiniDump.ps1 script of Powersploit. By default, the lsass process memory is dumped, but you could specify other process too.

And we recieve the dump in the specified gmail id.

Great! Now this dmp could be used to extract juicy information using any tool of choice.

Kautilya could be found here:
https://github.com/samratashok/Kautilya

Hope this would be useful to you. I await feedback, comments and bugs.
Nikhil SamratAshok Mittal at 1:11 AM
Share